My name is Arianna. Last name? Haven’t got a clue… The only reason why I know my first name is because it was engraved on a bracelet I had on me for as long as I can remember. It was the only possession of my own that I had growing up in an orphanage with many others like myself. I don’t have too many memories of the time before that. 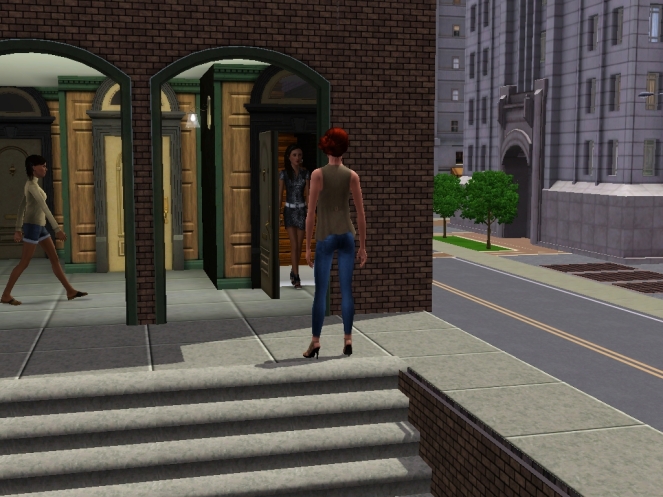 “Good morning Mrs. Jenkens.” I say. “Good morning sweetheart. Off to find work?” she asks. “Yup, the usual.” I say with a smile and I walk off.

I was lucky enough to find an apartment that was cheap enough for me to afford, when the time came for me to leave the orphanage. It has everything I need, and I am not picky when it comes to matching furniture or interior design. But now my funds are running low and I need to find a new job. 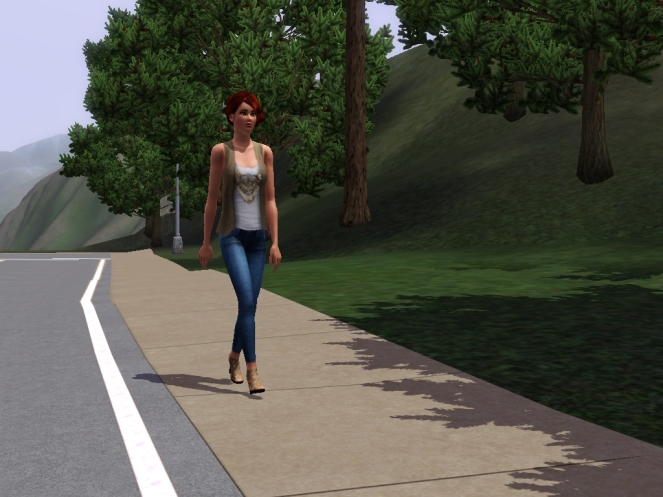 I am off to find Help Wanted signs on shop windowsills or flyers. I had a job helping at a pet store on 5th street owned by a man named Mr. Johnson. He however passed away due to old age and with no family to pass the store on to, the mayor ordered it to be closed and the animals relocated. Leaving my uncredentialed self jobless.

Funny how when I had a job, time passed so slowly. So boring. But now that I’m in desperate need of work, it feels like there’s hardly enough time in the day…

I go to a bench by the metro station and sit, wondering where to go next. It’s not easy finding a job with no passport, no birth certificate, no impressive resume… Mr. Johnson hired me because he said he could “see the good in me.” Well I hope some other people see it too… and soon… 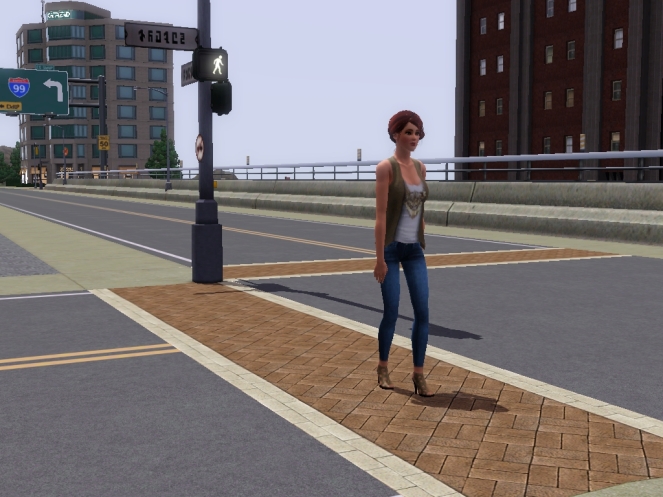 I don’t have enough money for a car and a bike seems like too much of a luxury, so I manage to stay in shape walking everywhere I need to go. Everfield is a nice town, everyone is friendly and walking is not out of the ordinary, and if I ever need to go far, there is a great, and cheap, subway system.

I arrive at a park downtown and run into Ms. Potter a nursery teacher I used to help a while back. However due to severe hearing loss incurred from an accident, she had to retire.

“Hello Arianna!” she screamed in my face. She had hearing aids, but they didn’t help a lot… “Still looking for a job?!!” she asked. “Yes ma’am.” I replied with a shrug. “It’s not easy.” I learned how to speak loud enough for her to hear me, but not so loud I screamed like her. 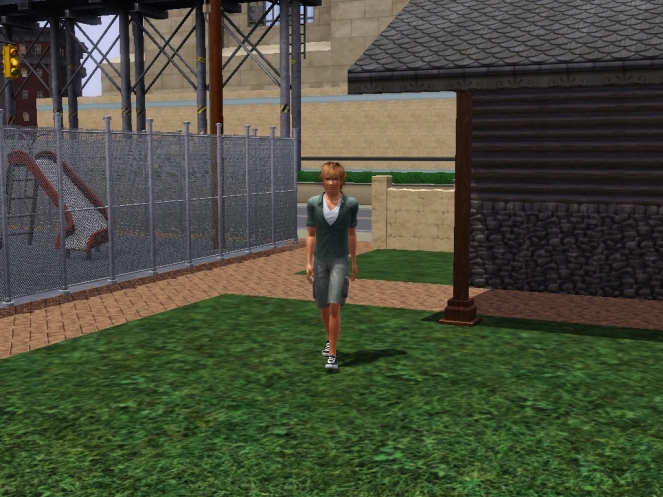 Out of my peripheral vision I saw a guy walk closer to our direction then stop… Was he listening to our conversation? I bet the whole park was… Ms. Potter was quite loud. After a few minutes of back and forth with Ms. Potter, he then gestured for me to go to him.

Did I just imagine that? “Why don’t you go to him. He looks like he has something important to say.” she yelled. I could see the boy holding in giggles. Since Ms. Potter saw it too, I guess I didn’t imagine it… 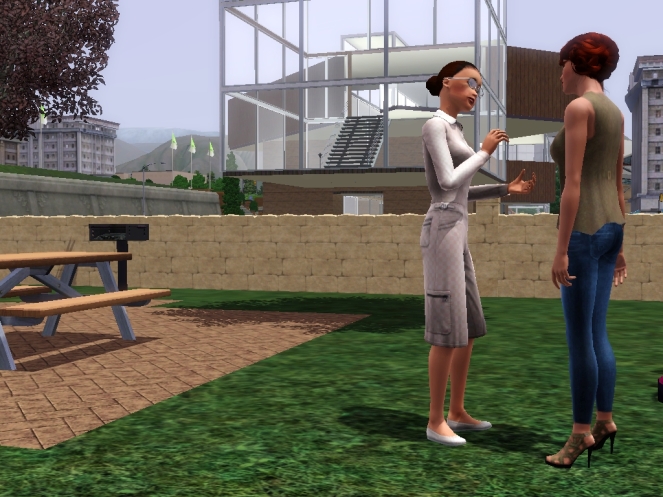 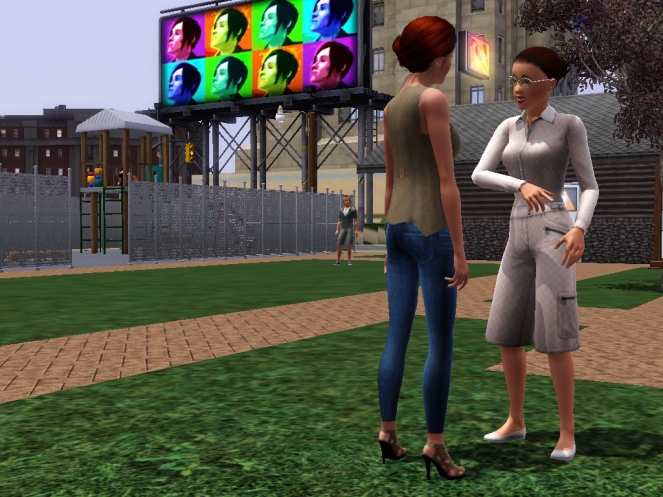 She cut me off… “No, go darling. I will see you when I see you.” And she walked off. I could see the stranger tapping his foot impatiently. 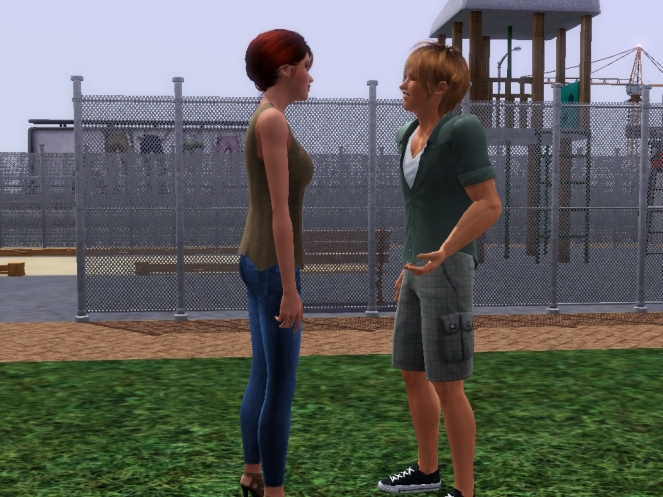 I walked to him and asked him what he wanted. “Is it true what that old lady said? Do you need a job?” he asked. His voice caught me off guard it was warm and smooth like honey, if it could talk. I almost lost my train of thought. “Because if you do, I know just where you could find one…” 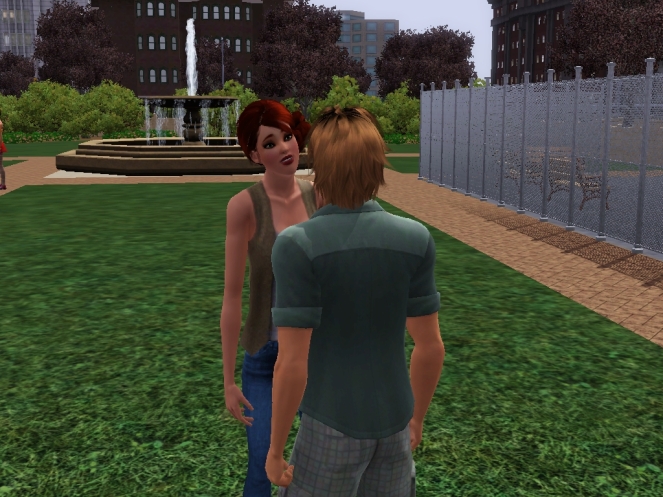 “Really?…” I said cautiously. I didn’t want to get my hopes up only to be disappointed. “Yeah.” he replied. “But I can’t tell you what it is until I get your word that you’ll do it…” he said with a sly smile. He didn’t look like he was lying. 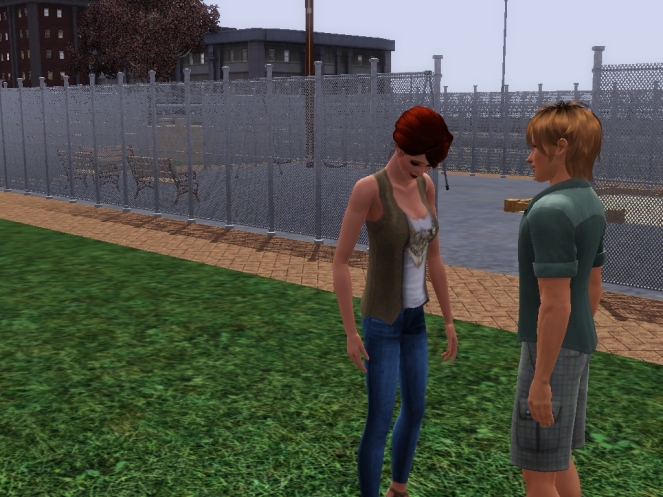 I looked down and weighed the possibilities in my head. It’s not like I had anything to lose… literally. So I said “Sure…” Why not? I mean the best case scenario is I have a job. 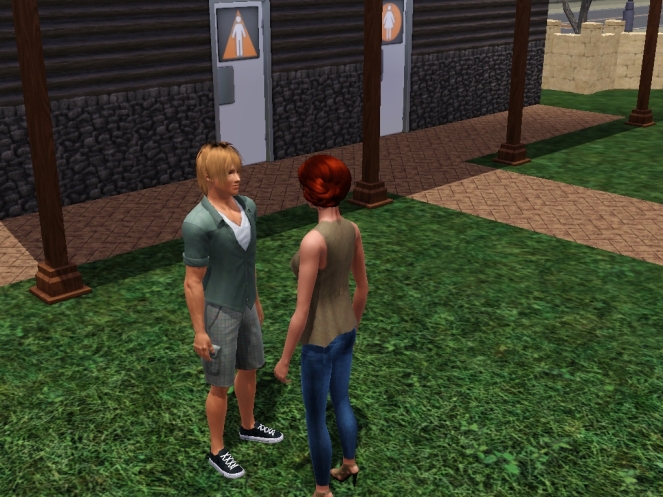 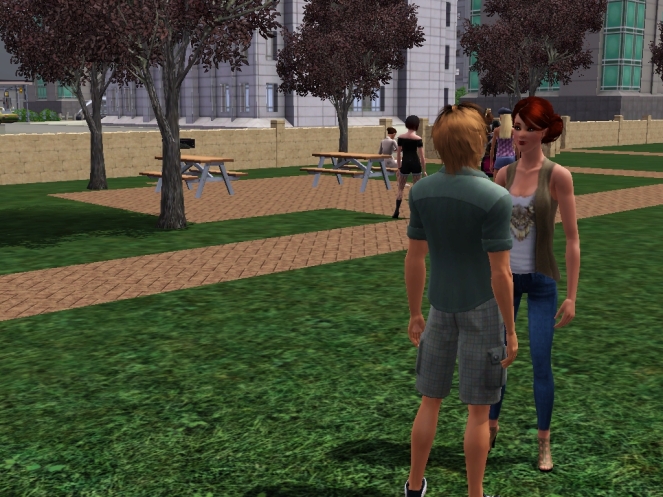 “But, uh… why don’t we leave the park, it’s getting a bit crowded…” he said while taking a glance to the growing crowd behind me.

“You coming or not?” he asked. I was following him through buildings I never visited downtown, they were quite interesting. I found myself stopping to admire them. Funny how I’ve lived here nearly 5 years now and never quite stopped to pay attention to the city, aside from wherever I needed to go. 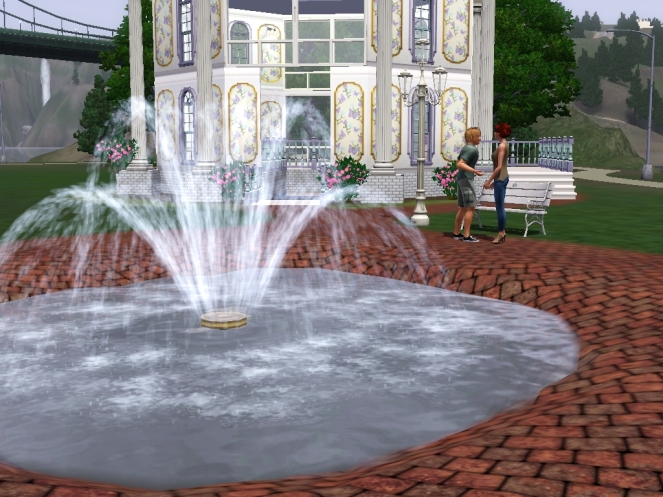 We finally arrived at a small community area on the other side of town. I told him about me… The little there was… my name, my likes, oh… and the fact that I am a poor orphan without a passport or job experience… just not in those words exactly… he said that was even better since it was a job I needed to move in order to do… “Move… move where?” I asked. I didn’t have much to move, but didn’t he hear me, I said I didn’t have a passport… Or a car, and taxi fares were expensive… 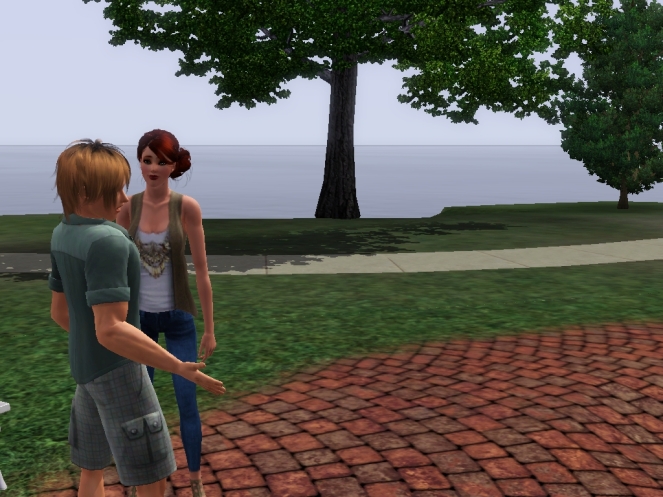 “It’s not far just half an hour away from here, I promise. I can provide transportation to come an pick you up from where you live.” he said. Well this already seems to good to be true. “What exactly is the job?…” I asked cautiously. “Oh it’s not hard really… It’s a: st.. .n ..id….” he mumbled. “Come again. I didn’t quite catch that.” I said. “I said a….”

“A STAY IN MAID!” I said. No way. nu-uh…. NOPE! I knew it, this was just a sick perv joking with me… “We will pay you quite a sum…” he said… He took out a handful of hundreds and handed them to me. That was more money than I had altogether! “What is this for?” I asked. “Consider it a starting fee…” he said. Well, maybe he wasn’t messing around then. “Umm ok…” I said in a daze. This money alone would be enough for me for weeks. I could only imagine what actually working for it would earn me. Wait, am I actually considering this… 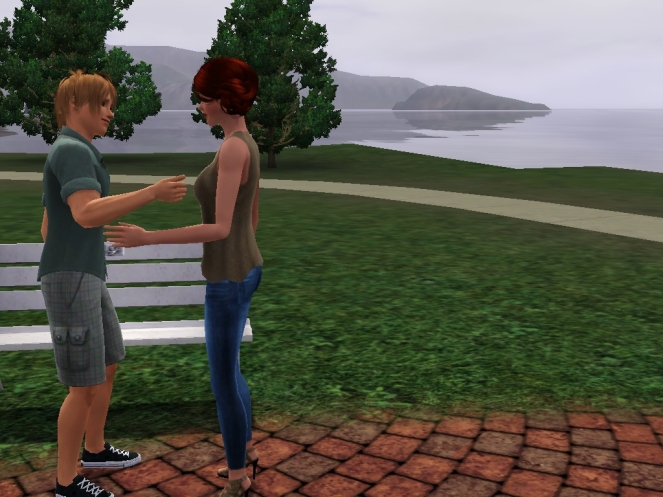 It took me a second to collect my thoughts… “I am sorry I can’t accept this.” I said. “Why not?” he asked. “I like to work for money.” I won’t spend it if it’s not earned.” “Interesting… Fine enough.” he said taking back his bills. “Oh there is one thing you should know though.” he said. “What is it?” He extended his hand and pulled me close. 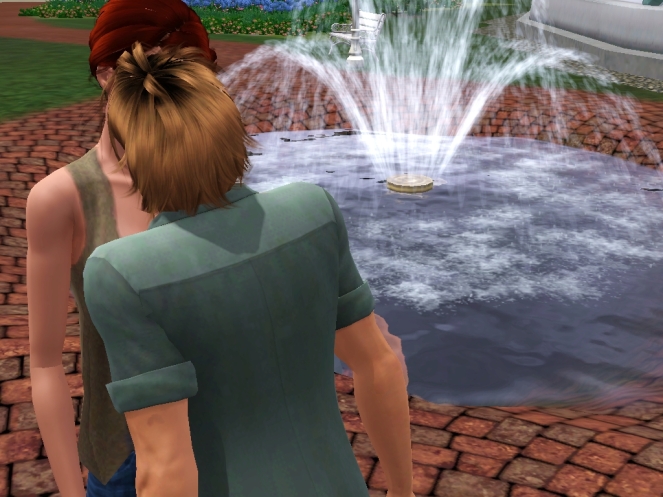 He pressed his lips on mine and pulled away slowly and said. “I do tend to ask for quite a lot.” And with that, he walked off and waved towards me without looking back. I stood there in a daze baffled at having just lost my first kiss to a stranger… Or should I call him boss…

Thanks for reading! What did you think? This is officially the third story I’ll be reposting… I had forgot to mention that on the last chapter of Harmonious I posted. Feel free to let me know what you thought~ Take care.
xoxo Amy

4 thoughts on “Standing On My Own Intro”