I awoke the next morning, my mind still lingering on the things Jane told me the night before.

While making my bed, the faint sound of machinery began to grow louder. 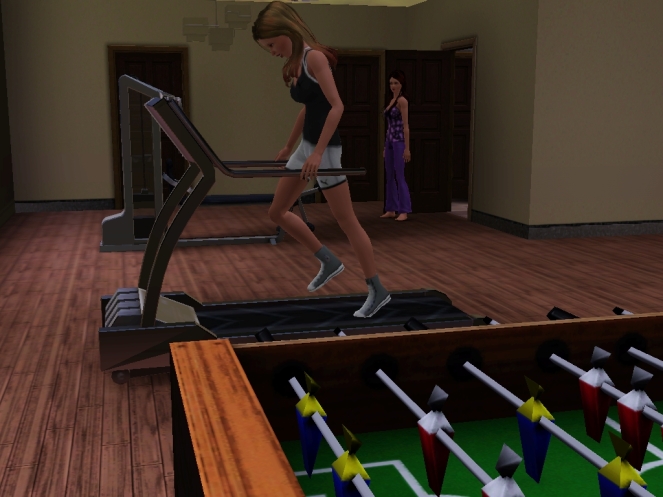 I washed up and walked outside to see Jane working out. No wonder she was so fit. I wonder how she had so much energy considering the fact we stayed up so late talking even after we got back from the party, surprisingly about things not Jesse related.

She approached me and asked if I liked the pajamas she let me borrow. I smiled saying they reminded me of the ones I had at home, while placing a loose string in place. “Go on downstairs and eat anything you like, or feel free to make something you want.” she said as she went back to her workout.

I walked, one foot after another on the cool wooden floor. Things here were so tranquil, and serene. I heard footsteps approaching from the left, so I turned my head slowly. 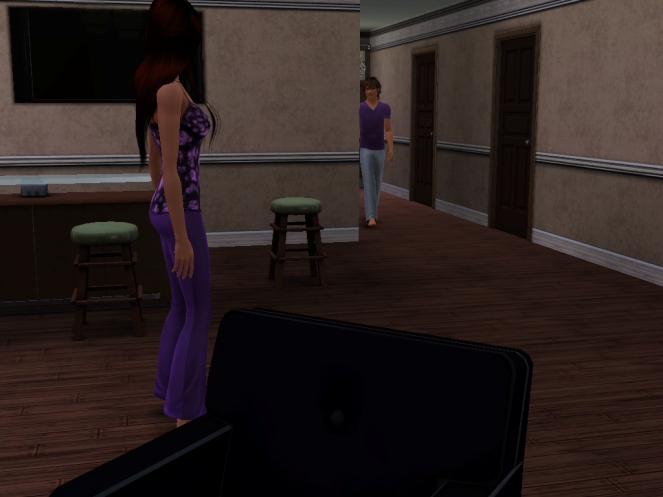 This house was just as large as Jesse’s, if not bigger. I saw him walking down the hallway, prim and poised.

“Mornin’.” he said with a smile. I just nodded, this is the first time I’ve seen him after hearing about his sad past. “Hey, we kind of match.” he said while pointing to his outfit and then mine. 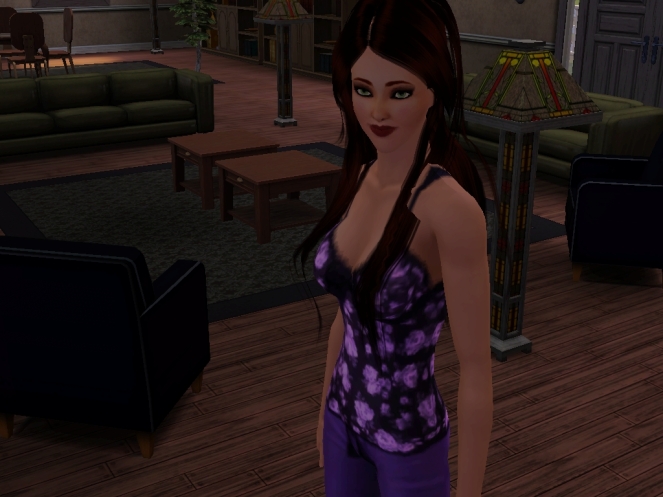 “Oh…” I barely managed to choke out. 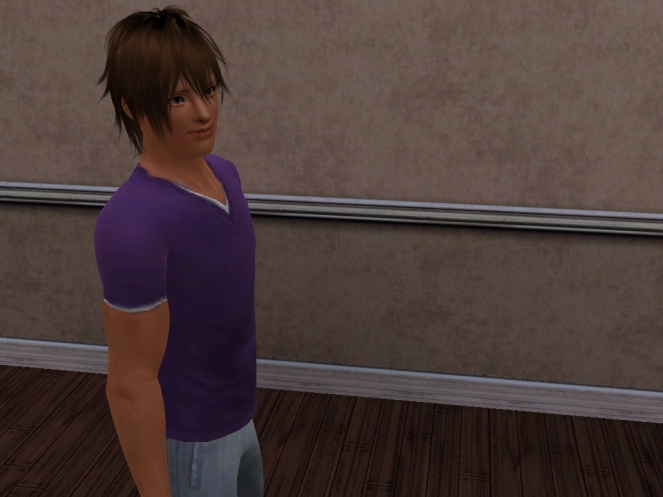 “Is something wrong?” he asked detecting that I was acting strange. I now know his reasons for avoiding me this past week, but it still made me kind of mad. I liked talking and hanging out with him, and this past week was so… lonely.

“No.” I said, as reassuring as I could. Out of the corner of my eye, I spotted the kitchen. I immediately dived for the fridge. Jesse was right behind me, quietly taking a seat. 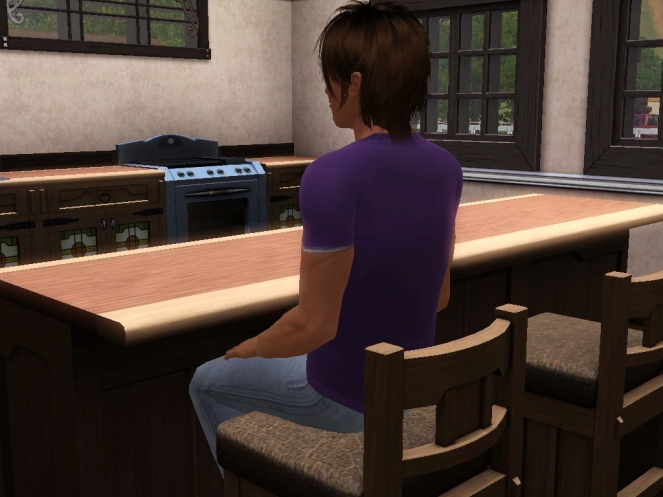 “Can you cook?” he asked. “Yup.” I said, my mood lifting in to a more comfortable one. If there was one thing I was proud of, then it was memorizing all the recipes I saw while working at a bakery a while back.

I could feel his eyes boring into my back. I suddenly had the drive to make this food really well. I decided to stick to waffles because they were the easiest and I could serve them with anything. 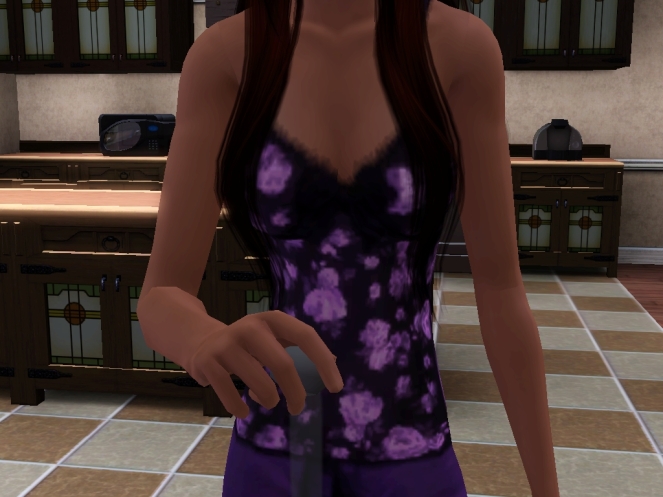 I pretended to be extremely focused on the food. A thousand thoughts crossed my mind on what he could be thinking about. 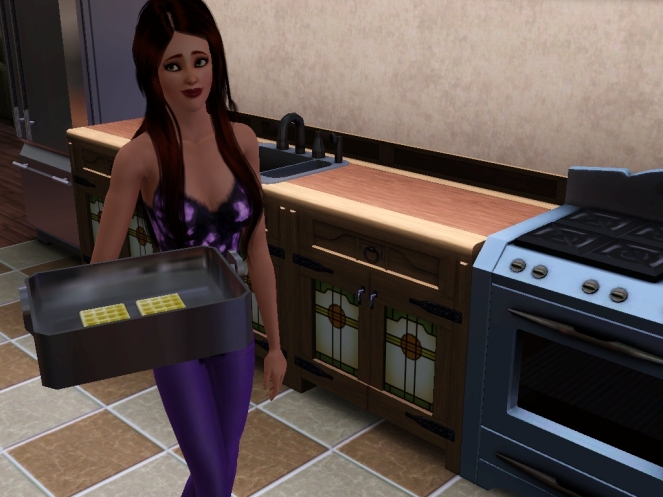 I just smiled at him as I walked by, hopefully I wouldn’t end up revealing all the things I know about him in my sleep or something. Even if I did, it’s not like he would be sleeping with me… I mean, next to me… I mean… My face began turning red. Ace’s teasing voice popped into my mind.

I placed the dough into the preheated oven, hopefully it turns out perfect. As I looked to the floor I saw Simone come to my feet.

I picked her up and walked back towards Jesse. I turned to face him and he turned his head towards the stairs. I almost thought he was avoiding me again, but it turns out he was just saying good morning to Jane.

I smelled her approaching; she smelled like vanilla and almonds. I think it was her shampoo because you could practically feel the scent coming off each curl of her hair.

Just as Jane got closer Simone began to happily lick my face and cuddle closer. I think she was trying to convey to Jane that she liked me. 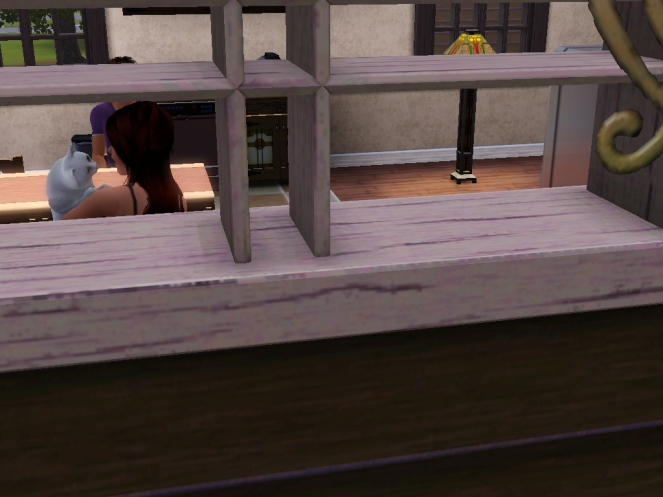 For a while I just stood there and played with her. She seemed so familiar and I’m not one to like pets, despite having worked at that pet store.

Before I knew it, the time to take out the breakfast had approached. It was only when I was putting down Simone, that I noticed that Jane and Jesse were both silently sitting there watching me. I placed the food on the table and they both rose without saying a word to take some. They then sat separately and began eating. Awkward. 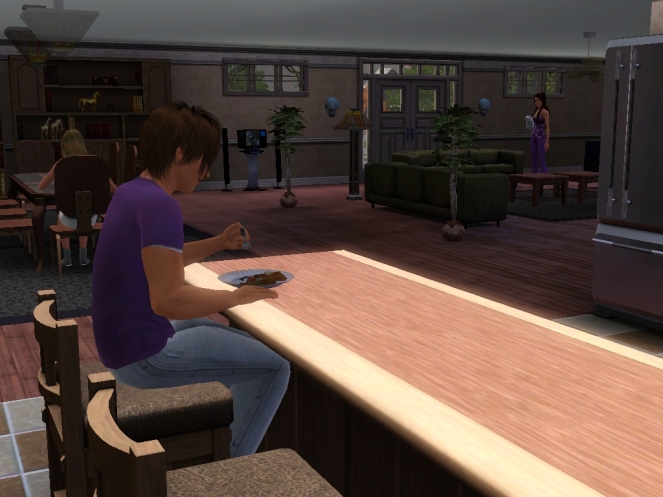 I excused myself to get some air and they both nodded and said thanks for the food. “You sure you aren’t hungry?” Jesse asked me. “I’m sure.” I replied. “Be back soon.” he said, “We are planning to go out for a bit.” “Sure.” I nodded, my mind already elsewhere. 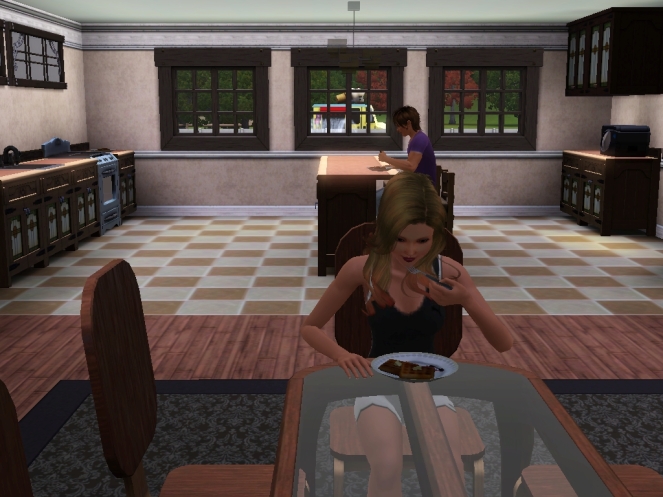 “I know why you chose her now.” Jane stated. “What’s that supposed to mean?” Jesse responded.

“You know exactly what it means!” she said back. “She reminds you of Amara doesn’t she?” Jesse just kept quiet and swallowed a mouthful of food.

Here I stand; its around 2 o’ clock now and Jane insisted that I wear this riding outfit of hers. I originally just threw it on sloppily thinking we were going to check out her barn. But she decided to slab on some makeup on me and do my hair.

I feel like I am overdressed to just look at horses, but considering the fact that Jesse and Jane are both beautiful without anything… all this work done to me makes me barely equal. 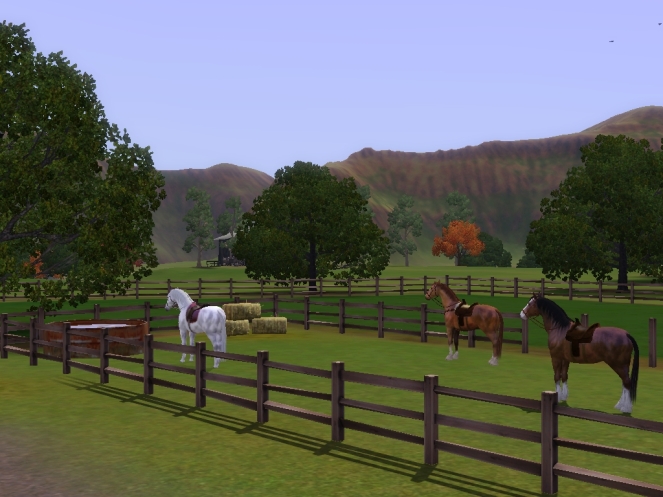 We didn’t need to go far, Jane has a barn out back, and all we needed to do was walk a bit.

We turned the corner and I see the gate to the stables.

I immediately get drawn to the side of a white horse. “Her name is Ariel.” says Jane. I stroke her and she doesn’t flinch.

Suddenly there it is again, the feeling of déjà vu. Just like that time in the park, my head is swarming with thoughts I can’t grasp images of color dance around in my mind and then it’s gone. 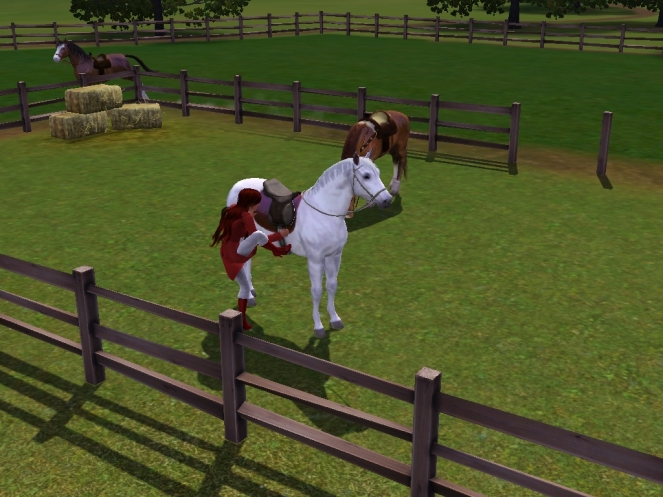 I shake my head and mount the horse. I have never ridden one before, but there I am, on it without instruction as to how to control it, move it, or anything. 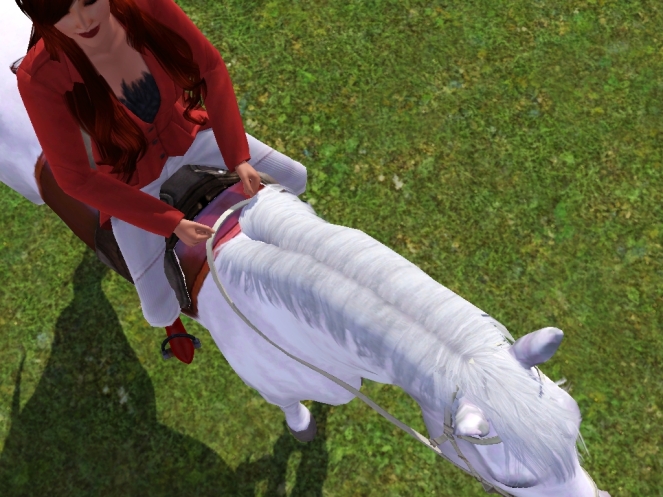 For the first few minutes I merely let my thoughts wander. The horse neither tries to shake me off nor feels uncomfortable. I watch her interact with the other horses.

Jesse stares at me with an expression I cannot put into words. His horse, Jackie, and mine come awfully close to one another. “You know how to ride?” Jesse asks. “Apparently so.” I say. He looks at me questioningly.

Just then Ariel begins to stiffen, and I know what I need to do. I tighten my grip on the reigns, straighten my back and with one swift movement, I whip the reigns and she immediately begins to pick up speed as we head out of the stables.

I feel Jesse and Jane’s stares as I ride off, before taking off on their own separate paths as well.

It’s been a few hours and Ariel and I have ridden around the entire town’s trails, or most of them. My entire body feels so at home on the horse.

A couple of minutes later we are all at the stables dismounting our horses. Maybe I was a pro at riding but my dismount could use some work. My jacket got caught on the saddle, and when I yanked it off I found myself falling to the ground.

But to my surprise, a pair of hands were there waiting, and caught me perfectly.

It was Jesse, and he straightened out and tightened his grip on me. 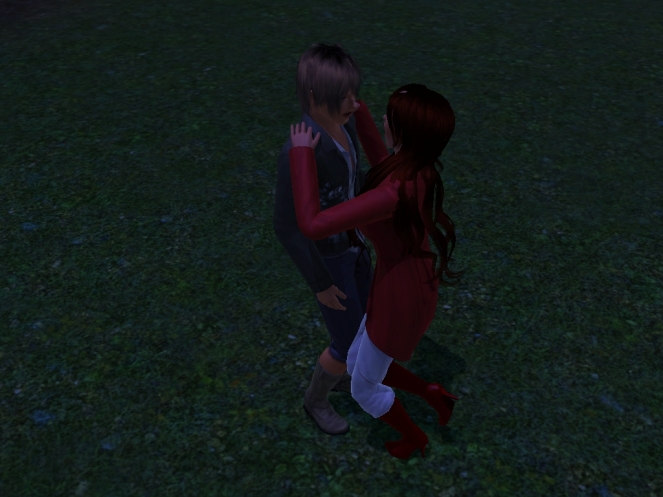 I quickly hopped down and caught myself staring into his eyes. He had a concerned look on his face and asked, “Are you alright?” I just nodded while staring at him.

A smile flashed across his face. He told me to meet him at the windmill out back at midnight. “I have something I want to do with you.” he said mysteriously.

Thanks for reading! These last few chapters were pretty long, I hope you enjoyed them regardless~ This is the first chapter of the new story arc, hence the slightly different featured image/cover. Take care.
xoxo Amy